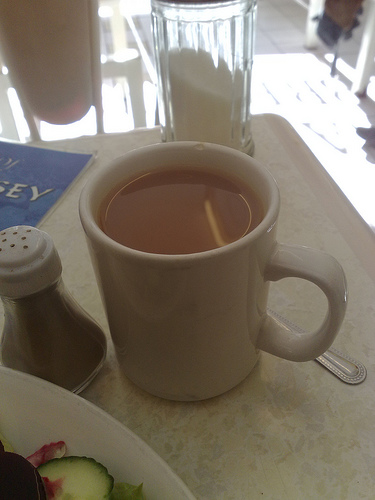 You will notice, on coming to Britain, that tea is served in a mug. Not a cup. Not a jar. Not a glass. A MUG.

You will ask for a cup ‘o tea or even a cuppa. You will still be given a mug of tea.

The phrases ‘cup of tea’, ‘cup ‘o tea’ and the word ‘cuppa’ are colloquialisms that all mean ‘drink of tea. And that drink of tea comes in a mug.

Think yourself lucky when handed that mug. 50 years ago you might have been handed a jam jar.

If you go to a self styled ‘posh’ tea house (and I’ve never seen a tea house in 39 years of life) you might be served tea in a cup but only because it plays to the whims of those who want to pretend for a while that they are drinking tea the proper way.

When we search the Internet for British tea drinking habits, we find thousands of articles written by non Brits. Take, for example, Wikipedia, where people chuck around terms like ‘high tea’ and ‘noon tea’ and tell us that people stop for tea at set times of the day.

As a Brit, I can tell you now that most articles about British tea drinking culture are complete bollocks.

I forgive you for thinking we all stop at 4 o’clock to drink ‘high tea’.

High tea does not exist. Never, in any part of Britain will you hear someone shout “Time for high tea!”

The only places in Britain where you will find people drinking high tea is in a their homes. The tea leaves will be green, will be mostly sticky, there will be buds and the tea will have a very peculiar odour that is nothing like the tea sold in legal shops outside of Amsterdam or California.

A tea break, more often called a ‘coffee break’ or just a ‘break’, can happen at any point during the day. There is no set time.

In an office environment, workers enjoy 15 minute tea breaks, coffee breaks or fag breaks during their day. Most office workers have 2 such breaks: one in the morning and one in the afternoon. These breaks are rest periods from work. There is no ritual surrounding the break. Tea might not even be drunk during the break.

On a building site or farm, that tea break happens whenever someone decides the time is ready.

Yep, or even coffee. You can make the fucker yourself unless you can find a mug to make it for you. While you’re at it, make me a cup too.

Called ‘supper’ in some parts of Britain. This is food not beverage. This is often the last meal of the day.

Again, this is afternoon tea aka supper. This is the time at which the final meal of the day is eaten.

There may be some historical connection between ‘tea time’ and the time at which the last drink of the day was brewed and poured. I can speculate no further on that connection because if there was a connection it is long gone.

Some Brits drink black tea, lemon tea, fruit teas, herb infusion teas and every other type of tea you can think of, including speciality teas sold by shifty looking men and women hanging outside of stores. Most drink tea with milk and turn their noses up at tea served without milk.

We love strong tea. Tea should be brick-red and hot when served. We have a thing for scolding our mouths without breaking a sweat or screaming in agony. Don’t ask why, I don’t know but maybe we do it to look tough.

In Britain, tea will most often be served in a mug. Probably with tea overflowing the mug and dripping onto the floor because the saucer is not there to catch the drips.

Saucers are used by old women to put their plant pots on to stop water dripping onto the windowsill or floor when plants are watered. What else would you use a saucer for?

Brew it in a mug

30 years ago, tea was brewed in a teapot. The pot was often covered with a tea cosy. Not any more. Nowadays, tea is brewed in the cup.

Get it over with already! I want my tea. Now!

Yes, we are an impatient group in Britain when it comes to getting our tea (or coffee or beer or lager or any other beverage).

We don’t have time to piss around with a teapot, tea strainer or tea cosy. For most of us Brits, brewing tea in anything but the mug the tea is to be drunk out of is just faffing around and quaint.

When we visit someone’s home and they brew a cuppa in a teapot, we leave and say ‘Did you see that teapot? ..That was nice…’

That’s not a compliment: that’s a polite way of saying “that’s so old fashioned!”.

People collect teapots for their cabinets and wall mantles; not to brew tea in.

On the Topic of Brewing…

How to brew a British cuppa

Here is how to make the perfect cup of British tea using the British way. Takes 30 seconds:

Make sure it is served in a mug. The mug should have chips in it to be an authentic British cuppa.

Any questions? No? Good.

This site uses Akismet to reduce spam. Learn how your comment data is processed.