The False Legitimacy of the EU

Unless you have been off planet enjoying a joyride in a UFO since 2016 (say hello to Gremm, for me, if you have) you will be sick of hearing about Brexit, the coming European wars it will cause and the rise of populism in Austria, Germany, Italy, Sweden and other EU nations. Well, I don’t care if you are sick of it. I voted Leave in the UK Brexit referendum, will vote Leave again if called to lift my pitchfork another time in defence of UK sovereignty and I want to give you a little indication of why there is a sudden surge of anti EU feeling in Britain and other parts of the EU.

Let’s look at the EU question from a slightly different stance to the typical and unimpressive Europhile statement that the EU exists and European governments have joined it so it automatically has legitimacy to exist.

To help gain some perspective on the UK’s relationship with the EU, two questions need to be answered. These questions may look odd at first sight but they lead somewhere magical.

Now that we are all either Leavers, Remainers, or Trolls-in-the-Middle I feel it prudent to ask you to answer these questions as though you are a UK citizen and a Remainer:

See the link at the bottom of this post to read the source data used hereon-in to compile tables and establish facts about voter turnout.

The last 5 General Elections saw a UK voter turnout below 70%.

By our 80/51 rule, none of the General Elections held in the UK from 1955 to 2017 were valid. To abide our rule we would have had to rerun and keep rerunning the elections until people rioted out of boredom.

Most parliamentary elections held by sovereign nations within the European geographic region achieve a voter turnout below 80%.

NB 1 Belgium, Liechtenstein, Luxembourg and Greece have compulsory voting laws, hence the two figures given above.

NB 2 The stats used to compile those averages come from elections held in 49 countries, some of which no longer exist, some which newly exist as independent states, and some which held elections sporadically or with gaps. All this can be checked in the Google spreadsheet linked at the bottom of this post.

Perhaps, in a stable functional democracy a more real-world realistic value for minimum voter turnout in order for an election or referendum to be considered valid ought to be, at my estimate, 60%.

I think we can agree that if voter turnout is under 60% then either a) the electorate is happy whoever gets into power, or, b) nobody is happy with the available politicians or parties and there is a big problem with the institutions of their government. I would take the latter argument to be more likely.

We won’t go into the vote-share discussion. It is an even less pretty picture than voter turnout. We can prove a point by looking at turnout alone.

What about European Union Elections?

The EU parliamentary election aggregate average turnout for the participant member nations is below 50%.

Did you catch that figure? It’s not even 60%. It already fails our hypothetic legitimacy test. We will ignore this detail for moment.

For EU parliamentary elections, the 2014 aggregate average voter turnout for all EU member states was 43%.

Belgium and Luxembourg managed 90% and 86% turnout in 2014, respectively. The mean average turnout with those two excluded is just under 40%. In fact, the stats suggest only a few member states of the EU have citizens who pay keen interest to EU elections.

So, not 60% engagement, not 50% engagement but 40% electorate engagement, and less. See the stats in the link at the bottom of this post to see how low it gets.

What is the UK Voter Turnout for EU Elections?

Look at the stats for yourself. 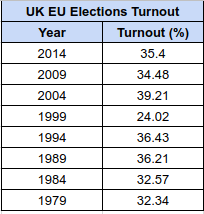 Excluding a couple of outliers, the story is similar across the EU. 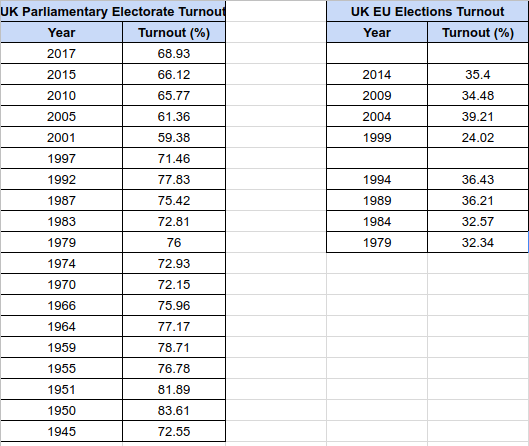 Supposedly democratic but how can an institution that creates/attracts so much voter apathy consider itself elected to hold office above free citizens and hold itself superior above their legitimately elected governments?

You can quiver “But.. but.. but the EU is democratic: we vote for MEPs!” and then follow up with “And national governments have a say in the running of the EU! There! Take that, Leaver…”

My answer is, and the answer given by so many people is:

What about that Second ‘Decider’ Referendum?

Many Remainers are asking for another ‘decider’ vote on Brexit because ‘people didn’t know what they were voting for or the implications of leaving the EU were too much for people to assess’. Insert any number of the many evil excuses tried by Remainers to get people and government to agree to a ‘People’s Vote’, as it is often now called.

So what about that? Why not have another vote?

People vote for emotional reasons. We can consider all the finer points of an election or referendum and consider all the issues of concern, and we can analyse all the facts and all the figures presented, but, as I am sure many who have read the above stats will do, people ignore facts and figures, they ignore the abstract logical arguments for and against one decision over another, and they vote based on emotional motives — Those two words do not just sound like each other for the fun of it: emotions motivate; ask any salesman.

We can kid ourselves into believing that big decisions are anything other than emotional decisions but that kidding makes it no less true. In fact, big decisions should usually be left to intuition after the facts have been digested.

Regardless the machinations of why people make the decisions they do, a rerun of the vote will not solve any issues. The UK is set to Leave the EU in March 2019 at 11PM Friday the 29th, to be precise.

Remainers want to rerun the Brexit referendum to force the electorate to reassess whether the supranational governing body called the EU should be the official agency that rules the UK; and yet, the EU is a poor vote puller.

EU elections attract so few votes that it does not even reach our hypothetical 60% voter engagement test of a democratic vote’s legitimacy.

Sigh… I Play It Again, Sam, One More Time

The Brexit referendum achieved 72% voter participation. 52% of those who voted chose Leave. Now that vote does pass our hypothetical legitimacy test. There was over 70% turnout. The golden egg was won by Leave with over 51% of vote-share.

To reset the let’s rerun the referendum question in its proper frame, it should read:

“Why can’t we let the UK be governed by a supranational authority that receives a minuscule vote share when that vote share is compared to the UK’s nationally elected government’s vote-share?”

That is what Remainers are really requesting: that the UK allow itself to be micromanaged and governed by a ‘party’ that would never get into UK government if it stood in a UK General Election.

If a UK General Election managed to activate only 30% of voters to turnout it would be valid in the UK’s first-past-the-post electoral system but considered illegitimate in the minds and hearts of the electorate. It would be rerun after consideration of the UK’s established democratic processes and a referendum held on the way the electorate wished the process to be conducted.

Imagine if we did rerun the referendum. How would the EU enjoy being stuffed with EU-loathing politicians? The EU elections that follow a Brexit referendum rerun, or other betrayal of the Brexit vote, would achieve the highest level of participation in the EU’s history; and that would not be good news for the EU.

Remainers Need to Give Over Being the 5th Column

If Remainers want another referendum they should wait until Brexit has been achieved, wait a few years to see how Brexit works, see whether the EU alive a few years after Brexit is an EU they would be proud to rejoin then, if you still care to try to rejoin the EU, campaign for another referendum. Maybe the 26, 25 or 20-odd members of the EU will allow Europhiles to take the UK back into the EU.

At the moment, Remainers acting as vindictively and snidely as they currently do, they are the 5th Column and they stand in the way of the UK’s future position in the wider world. Remainers are negligently at odds with the will of the UK electorate and are willfully hurting the prospects of the United Kingdom’s citizens.

What About That Populism, Then?

Which version of populism? The reality or the media’s framing of it?

What we see now are the citizens of European nations pushing back against politicians and institutionaries who willfully ignore and patronise their paymasters. They attack citizens with contempt. The beurocracy, regulations, laws, fines, license fees and other charges that those same politicians and institutionaries foist onto citizens is too much for citizens to carry. The electorate is pissed. The pushback is healthy.

The citizens’ pushback is a symptom of society’s immune system stamping on the political diseases that have been attacking society for too many years to bother to count.

The EU is so rule crazy even Caligula would blush at some of the shite that comes out of the EU’s bowels.

You can exclude data by putting an X into the “exclude” columns and rows.

This site uses Akismet to reduce spam. Learn how your comment data is processed.